BUZZ CITIES: YOUNG PROFESSIONALS ARE IN MOTION, AND HERE IS WHERE THE TALENT, ACTION AND PROFITS CAN BE FOUND 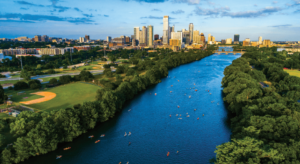 Buzz: An atmosphere of excitement and activity.

Now, more than in a long time, young American professionals are on the move — driven from their fixed positions in major U.S. cities, and no longer tethered to their physical places of employment.

Yes, it’s one of the symptoms of the coronavirus pandemic, but more accurately the pandemic has accelerated changes in the job market that have been trending for a couple of decades, especially among members of the so-called knowledge economy (people who work with information in its various forms can pretty much work from anywhere that has a dependable internet connection).

Given freedom of movement, where do young knowledge-economy professionals go? You probably can rattle off at least some of the names of cities that are creating buzz these days: Austin, Boise, Charlotte, Dallas/Ft. Worth, Denver, Phoenix, Nashville, Raleigh and Salt Lake City, among others.

Increasingly, it seems, rather than strictly following relocating to cities with strong employment opportunities, young professionals are choosing markets based on cultural and quality-of-life issues, and then seeking employment — and employers are following the migrations. Indeed, while professionals used to follow employers to jobs, employers appear increasingly willing to follow employees to hot, new markets. Witness the decision by AllianceBernstein to uproot its New York City headquarters for a move to Nashville. Yes, the global asset management firm saved bundles of cash on taxes and real estate costs with the move, but would it ever have considered Nashville if not for the steady torrent of Americans flooding into the city and surrounding areas? The company will invest more than $70 million in the city as part of the relocation of its more than 1,000 headquarters employees, and plans to finish the transition from Manhattan to Nashville by 2022.

Mitch Faccio, vice president of acquisitions at MLG Capital, cites Austin as a sterling example of a buzz city, noting the city’s population has grown 30 percent between 2010 and 2019, making it one of the fastest growing U.S. cities, according to Census Bureau statistics.

“That equates to approximately 510,000 new residents over nine years — or 155 new residents a day,” says Faccio. “In addition, in that same amount of time, Austin has seen 466 new businesses relocate to the city. A lot has contributed to this insane growth, but the point is that the city is attracting businesses and people alike.”

What do Austin, Nashville and other buzz cities have in common?

Adam Segal, CEO of Cove, a company that integrates technology in buildings, calls buzz cities destinations that draw people seeking a more holistic approach to modern living — which can take many forms, though the key is a place where people want to be to not only work but live and “experience the entire ecosystem.”

Sean Burton, CEO of Cityview, a multifamily and mixed-use development firm, adds: “Our definition of a buzz city is one poised for, or experiencing, outsized growth because of its strong underlying market fundamentals. Strong demand driven by population growth, employment growth, income growth, rent growth and other key drivers are critical. We focus on areas with prosperous job centers fueling economic growth that attract employees and renters. Prior to the pandemic, markets in the western half of the U.S., such as Seattle, Portland, Denver, Phoenix, Salt Lake City, Dallas, Austin, Los Angeles and the Bay Area were all experiencing population, employment and income growth more than 35 percent above the national average and we expect these markets to see a more rapid and robust recovery coming out of the pandemic.”

More specifically, the essential components that make a city buzz, in Faccio’s estimation, include a friendly business climate, affordability relative to incomes, thriving local customs and culture, urban planning devoted to long-term growth and sustainability, access to airports and public transportation, and a strong school system and higher education opportunities.

Segal reasons that there is no required list of buzz-city components; rather any city can brand itself in ways to align with the qualities it has to offer, such as a thriving art, food and music scene.

Indeed, Charlotte, home to the Charlotte Hornets, an NBA franchise, features a Buzz City decal on the center of the team’s home basketball court. Charlotte is also an example of a city that doesn’t boast a major university but touts the No. 2 banking market in the United States and a booming real estate market.

It is agreed that real estate is far and away the most investable asset class in fast-growing buzz cities, and multifamily housing is chief among the property types, though industrial and retail have a strong place in any growth market.

“As up-and-coming markets, these cities offer a wealth of value-add multifamily opportunities that add to their investment appeal because they are positioned for strong ROI,” says Sharkansky. “Investors who know how to elevate apartment communities to meet the demands of today’s demographics while staying aligned with the market’s appeal should profit.”

Demographically, buzz cities are rife with young families, educated professionals and quality-of-life characteristics that appeal to that group, Streit asserts.

Faccio explains that “psychographics” play an interesting role in creating a buzz city and its culture.

“It is far less quantitative than demographics, but the nuances can make or break a city,” he says. “One of the most important qualities here would be an entrepreneurial mindset, with a focus on long-term growth.”

Adds Sharkansky: “Younger demographic groups are drawn to buzz cities because of rising career opportunities and growth. Similarly, baby boomers also tend to like the pace, affordability and lifestyle.”

Naturally, there are many strong U.S. metropolises that have fallen short of being buzz-worthy, many of which have many of the requisite characteristics. One might think in terms of Minneapolis, Pittsburgh and Tucson. Chicago, despite its history and culture and top-tier credentials, has been losing population for decades. How do otherwise formidable cities create some bona-fide buzz?

Faccio says they could start by embracing change. “One of the biggest market disruptors we are seeing in the country right now is technology,” he observes. “Artificial intelligence, cloud computing, social media, self-driving cars, virtual grocery shopping and virtual reality are just a few. Buzz cites recognize that technology is going to continue to develop, and they need to find ways to capitalize on those new developments to improve the urban quality of life. Whether it be making daily commutes faster, tracking and restructuring energy shortfalls, or streamlining government systems, the result will be a city that will attract businesses and people alike.”

Another critical component cited by Faccio is to excite others with local culture and the urban character. “A buzz city knows how to differentiate itself and that makes people want to move there or visit,” he remarks. “If you look at some of the world’s most famous cities — London, New York, Rome, Dubai, Paris — it is clear they are special in their own right. It would be pretty lackluster to fly across the country just to land in a city that feels like the one you just left.”

As Segal puts it: “Create a great product and a great experience and people will find their way there. This is across the board from culture, infrastructure and quality of life. This often starts with investment from the local government to ensure the right pieces are in place for the private sector to build upon.”

Segal believes the past 14 months have unlocked a new opportunity for cities to brand themselves and become destinations for remote workers and modern companies looking to open satellite offices.

“The more a city considers this in their branding,” he says, “the better likelihood they will be able to create buzz.” Devang Shah is responsible for multifamily value add acquisition and asset management in Southern California. He has 22 years of experience in real estate investment, development, design, construction and asset management. Previously, Devang was the principal of Marketcents Inc. an independent project management firm, serving as an owner’s representative to investment firms, builders and developers. Prior to that, he worked was Vice-President at RCLCo, LLC, a national independent real estate consulting firm. ​